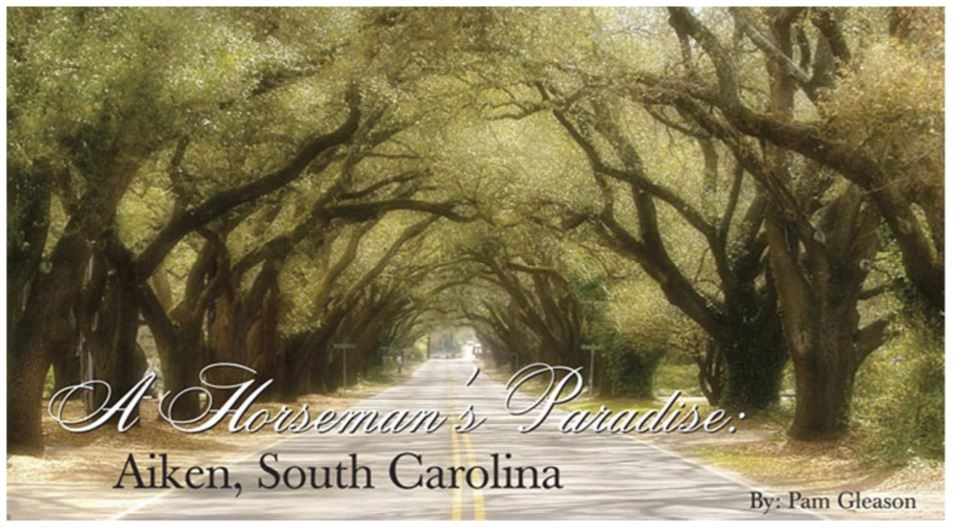 When horse people discover Aiken, they often feel that they have finally come home.
The city, located halfway between Augusta, Georgia, and Columbia, South
Carolina, is immersed in horse culture.

Downtown, the street signs are embellished with horse heads, restaurant walls display racing silks and polo photographs, and life-sized model horses grace city sidewalks, parks and patios.
At lunchtime, people in boots and riding clothes are a common sight on the city streets. In restaurants, one often overhears fragments of horse-related conversation.

Aiken is not exclusively identified with any one particular equestrian sport. The area is well known for fox hunting, for polo and as a place to train young racehorses. However, in recent years the eventing community has also found Aiken. So have combined driving competitors.

Spring horse shows draw entrants from near and far.
Trail and pleasure riders abound. The horse community is not limited to English pursuits either. Every winter, the Augusta Cutting Horse Futurity attracts hundreds of cutting enthusiasts, reining is growing and barrel racing has become a big sport.

Aiken’s greatest attraction is probably its atmosphere. The community here is friendly and welcoming. When asked to describe why they are so strongly drawn to the place, residents and visitors alike tend to remark on Aiken’s “small town feeling” combined with its “big city sophistication.” The downtown area boasts shops, boutiques and a remarkable selection of good restaurants. A few blocks away, the stately historic district is still largely unpaved, keeping the roads hoof-friendly.

The Hitchcock Woods, a 2,000-acre park of huge pines, Another tradition started by the Hitchcock’s in 1916 is the annual Aiken Horse Show, held at the show grounds in the Hitchcock Woods. The “Show in the Woods,” which celebrates its 90th anniversary this March 2006, is an event like no other. The only time that cars are allowed into the Woods is during the horse show.

However, horse trailers must park outside, so riders hack into the showgrounds. Prepared months in advance, the ring is blanketed in thick green winter grass and decorated with hundreds of flowering shrubs and trees. A benefit for the Hitchcock Woods Foundation, the show features a silent auction and an elaborate luncheon held in a ringside tent.

Aiken also has a long history in the horse racing world. The Training Track, located in the middle of the historic district, has provided a start for hundreds of Thoroughbreds. The Aiken Thoroughbred Hall of Fame and Museum in nearby Hopeland Gardens includes five-time Horse of the Year Kelso, Kentucky Derby-winner Swale and Eclipse Award-winner Pleasant Colony, among many others. Each March, the Aiken Triple Crown begins with the Aiken Trials, a day of practice races for two year olds. Spectators flock to the races, hoping to see tomorrow’s champions. When an Aiken Training Track’s graduate enters a top race such as the Kentucky Derby, the whole town celebrates. Winners are local heroes, who might be granted such popular honors as a drink or a dish named for them at a local eatery.

The Aiken Steeplechase Association is also thriving. The Aiken Spring Steeplechase, which is the second leg of the Aiken Triple Crown, draws crowds of 10,000 and more to Ford Conger Field on the edge of the historic district. The Fall Steeplechase, a smaller affair, is still an important part of the national circuit, bringing in top trainers while giving many younger horses a chance to test themselves over Aiken’s course.
Many additional horse sports have dug their hooves into Aiken’s soil. Most notable among these is eventing. Today, Aiken County is home to five separate eventing facilities, each with a complete cross country course and facilities for dressage and stadium jumping. Events held in the spring and fall are so popular, organizers usually have to stop accepting entries after one day.

Driving has also gained a strong following. The annual Katydid Combined Driving Event, held in the fall, attracts drivers from many states, and several international combined driving competitors are now based in Aiken. There are plenty of great places to drive in Aiken, from the unpaved roads in the historic district to the wide, manicured paths in the Hitchcock Woods. The Aiken Driving Club has an active membership, and coach and carriages parades are popular added attractions to the Aiken Steeplechase and to Aiken Polo’s spring kickoff event, (the third leg of the Aiken Triple Crown) a benefit game for the University of South Carolina at Aiken.

Excerpts from featured editorial on farmandranch.com Pam Gleason is the editor and publisher of The Aiken Horse, Aiken’s horse newspaper.
www.theaikenhorse.com. All photos by Shelly Marshall Schmidt, www.ohschmidt.com